Chicago, IL, September 5, 2013: Chicago Sensor, Inc., a leader in the manufacture of liquid level sensors in the U.S. and internationally, has begun marketing two standard dual level float switches. The vertical-mount float switches feature POM stems and polypropylene foam floats. FLT261, FLT262 and FLT263 all feature a 1.3 inch differential between the high and low level measurements. The switches have four wires. Two red wires represent the high level and two black wires represent the low level. All levels are normally-closed but can be reversed to normally-open through the normal procedure of removing the float and inverting it. 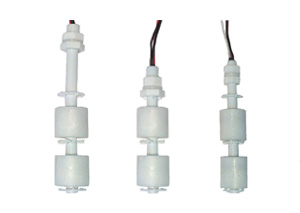 Dual level float switches are useful when it is desirable to maintain a liquid level within a tight range but with a sensitivity of 1-1.5 inches, not the .2 inches normally inherent in a single level switch. When single level switches are used to maintain a level in a chamber, factors such as turbulence can cause rapid cycling since a small movement in the float causes the float switch to open or close.

These dual level sensors are value-priced and in stock, ready to ship. See them here. See our technical page on High Low Level Applications for more information about the use of two switches or dual level switches in drain or fill applications.